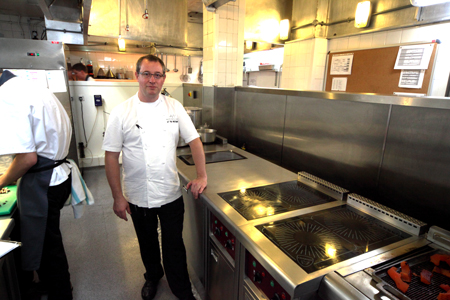 His first Michelin Star and three AA rosettes followed in short succession, along with being voted 15th in the National Restaurant awards and winning the coveted ‘National Chef of the Year’ title in 2012.

Alan was first cooking at The Westbury on a big, electric range. “When I took over here I wanted to upgrade the kitchen and, as it happened Eric Chavot was opening up next door (Brasserie Chavot) and refurbishing his kitchen. I took his two old passes, counter fridges and the old electric stove and CCE carried out all the fabrication work needed.”

Although it provided plenty of working space, the range used so much power it was helping to take the hotel close to the threshold of power consumption for buildings in Mayfair. A replacement was required. “I always fancied an induction stove and chose Charvet partly because it needed less power and partly for environmental reasons. It makes sense to reduce consumption and achieve a cooler working environment.

“There was a choice of three suppliers, but during discussions with Ray Costelloe (Managing Director of catering equipment distributor Contract Catering Equipment), it turned out that he had a second hand but unused Charvet wall suite that was a perfect fit. It was just a case of getting used to working with one pan, one hob, so I have to think about the menu and make sure there is not too much pan work – we just have the range here and planchas to cook on.”

“I chose Charvet because of the fit, the quality of manufacture and because I got a discounted rate; I am happy!”