Work had been progressing on the design for training kitchens for Plymouth since 2010. 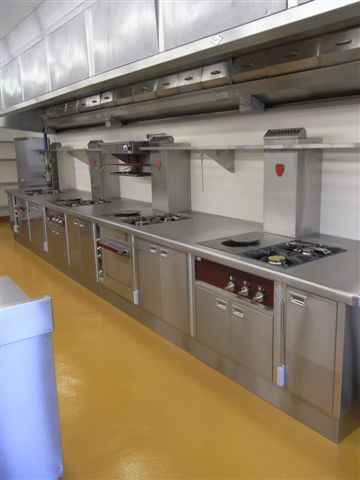 Head of faculty, Martin Nash had two kitchens that badly needed updating but he had the problem that both kitchens had wall suites and he ideally wanted central island suites.

Martin had the choice of having one refurbished as a central island with new canopy and leaving one as wall suites, his problem was he wanted Charvet ranges in both!  The new central island configuration meant considerable cost increase due to the extraction canopy, his solution was to keep both kitchens as wall suites and having Charvet in both!

Space Catering came up with a superb design for central work stations with students moving to either side for their cooking.  Both training kitchens are identical with one wall suite being all electric with the other gas.  Each kitchen has a Rise & Fall demonstration unit featuring induction hobs that can be used for DDA requirements.